With declining NAEP scores in both math and English following closely on the heels of disappointing Common Core assessment results, can full frontal finger-pointing be long in the offing? Speaking of the statistically significant scores on the National Assessment of Educational Progress, Acting Commissioner of the National Center for Education Statistics, Peggy G. Carr told reporters: “This isn’t a pattern that we saw coming. It was an unexpected downturn.” How is the blame game likely to unfold?

In an article published earlier this month, Education Week identified several leading targets: the Common Core State Standards, frequent testing, the economy, and demographic changes, but added the caveat that, “…such explanations should be viewed skeptically-both because the test scores don’t explain causation and because the drop will not necessarily lead to a long-term trend.” Whereas the public would be well advised to take heed of such cautionary notes, the finger-pointing is unlikely to abate.

Opponents of the Common Core will assert that lower test scores demonstrate the deleterious consequences that result when local control is expropriated by the federal government. Proponents will counter (with justification) that the new national standards haven’t been in place long enough to draw meaningful conclusions about their impact on NAEP scores. To which opponents might (also justifiably) counter that, as has been true of previous education policies, the Common Core State Standards might not survive long enough to permit such meaningful conclusions, leaving students the victims of constant ‘retooling’.

Those who find fault in a surfeit of standardized testing apparently have a champion in no less formidable a leader than President Barack Obama. Weighing in on pending Congressional efforts to reauthorize the federal Elementary and Secondary Education Act, the Obama Administration has called for a reduction in “over-testing” such that no public school student would spend more than two percent of overall instructional time engaged in test taking. The U.S. Department of Education actually issued an action plan for the achievement of such goals. Skeptics of the President’s pronouncements were quick to note that Mr. Obama continues to emphasize the importance of tests, which he regards as a necessary means of assuring the accountability of schools and districts in the effort to close the so-called accountability gap, a task regarded by the President as a civil rights issue. 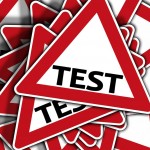 Among those pointing fingers at the economy is the AASA, The School Superintendents Association. In a statement issued upon the release of the NAEP results, the national organization exhorted the public to, “…consider the extent to which this set of NAEP data was impacted by the significant cuts to education investment at the local, state and federal level stemming from the great recession and held in place by continued poor policy.” Of course, those holding such a view are burdened with the task of explaining why the most recent NAEP data broke an uptrend that continued over three administrations of the tests (conducted every two years) occurring during the worst years of the ‘great recession’.

Still others cite demographic changes, pointing to an increase in the number of English-learners and students with special needs who now take the tests, as well as a growing proportion of Hispanic test-takers relative to white pupils. Some argue that the success of schools in maintaining the enrollment of under-achieving students who may previously have dropped out, but who now take the NAEP in greater numbers, contributes to the lower test results. Others counter by observing that the scores of students in the highest-achieving percentiles have remained flat across successive administrations of the test.

As such charges and recriminations proliferate, I look for one explanation to register steady gains in popularity: the persistence of poverty. Poverty offers both a plausible cause – some will say ‘excuse’ – for stagnant, or declining test scores, as well as a linchpin of sorts that connects several of the aforementioned explanations. It offers a certain expediency via the relief it affords teachers, administrators, curriculum developers, test designers, and others. It comes with a decades-long empirical pedigree whose provenance is found in the work of James S. Coleman and associates in the 1960s. It elicits a certain historical recognition of the nation’s tendency to expect too much of its teachers, and it also jibes with common sense. Most poignantly, poverty is, inarguably, detrimental to children’s welfare and prospects. None would dismiss the notion that poverty saddles children with a host of disadvantages.

A renewed emphasis on the deleterious effects of poverty on education comports quite comfortably with the social justice orientation already salient in graduate schools of education throughout the country. Prominent academics will give a renewed, and more urgent voice to the ill effects of the poverty-education nexus. As but one example, David Berliner has written:

“America’s dirty little secret is that a large majority of poor kids attending schools that serve the poor are not going to have successful lives. Reality is not nearly as comforting as myth. Reality does not make us feel good. But the facts are clear. Most children born into the lower social classes will not make it out of that class, even when exposed to heroic educators. A simple statistic illustrates this point: In an age where college degrees are important for determining success in life, only 9% of low-income children will obtain those degrees (Bailey & Dynarski, 2011). And that discouraging figure is based on data from before the recent recession that has hurt family income and resulted in large increases in college tuition. Thus, the current rate of college completion by low-income students is probably lower than suggested by those data. Powerful social forces exist to constrain the lives led by the poor, and our nation pays an enormous price for not trying harder to ameliorate these conditions.”

Other voices may temper such expressions. Noting that American Federation of Teachers president Randi Weingarten has called poverty “the elephant in the room” that explains poor test performance, Michael J. Petrilli and Brandon L. Wright raise interesting questions in an article appearing in the current edition of EducationNext, titled, “America’s Mediocre Test Scores: Education crisis, or poverty crisis?” Petrilli and Wright ask whether U.S. students from low-income families fared better or worse than their peers participating in the Program for International Student Assessment (PISA), which conducts a series of international achievement tests, taking certain family background factors, including wealth, into account. They conclude that U.S. schools appear to teach students falling into the highest and lowest status quartiles equally well (or poorly). Moreover, they argue that the underperformance of U.S. students on the PISA tests is explained by the lower test scores of ‘advantaged’ U.S. students, rather than the scores earned by their ‘disadvantaged’ U.S. counterparts.

Petrilli and Wright also ask whether the U.S. has a greater proportion of low-income students than other countries. Their answer is: it depends on which measures are used to denote ‘poverty’. If market income figures – which exclude government transfers such as welfare payments, food and medical subsidies – are used, and any family earning less than fifty percent of the national median income figure is deemed ‘poor’, the incidence of poverty in the U.S. will appear greater than that of other industrialized nations. When government transfers (which, after all, are intended to reduce income inequality) are included in the computation of income, and total (rather than relative) incomes are compared, the incidence of poverty in the U.S. appears to be about the same as that in Germany, and less than that found in nations such as the United Kingdom and Ireland.

These are but preliminary examples of what I foresee as a long-playing debate on poverty and education policy. I believe it is a debate that will persist regardless of which party wins the White House in 2016. It’s also a discussion in which private school leaders and advocates must be involved, lest others erroneously conclude that the private school community is unconcerned with children living in poverty, and the expansion of access to private schools so as to welcome such children. Daunting as the economics and politics of the matter may be, the transformative power of community-based education ought not be discounted in a society dedicated to the amelioration of poverty and a more promising future for all.