It was a very pleasant late summer evening. My parents were away in Chicago, and it had been three months since I obtained my driver’s license.   Hours earlier, in what later might be thought of as something of a Ferris Bueller moment, I had phoned a couple of friends and told my younger brother, Peter, that we were going to the ball game. The date was September 9, 1965. While we didn’t know it as we drove from the San Fernando Valley to Chavez Ravine, we were about to witness what many consider to have been the greatest pitcher’s duel in baseball history.

On that evening, the Los Angeles Dodgers’ Sandy Koufax not only pitched his fourth no-hitter; he tossed a perfect game. Twenty-seven Chicago Cubs batters marched to the plate, and not a single one of them reached base. In the process, the Dodgers’ ace left-hander recorded 14 strikeouts, including the last six consecutive batters. In a Hall of Fame career, this was his masterpiece. 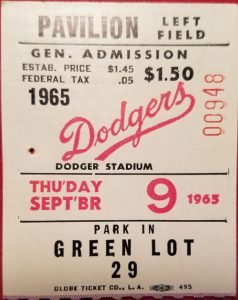 As if that wasn’t special enough, Koufax’s opponent, Cubs pitcher Bob Hendley allowed but one hit over the span of eight innings – a bloop double off the bat of the Dodgers’ Lou Johnson that fell just inside the right field foul line in the seventh inning. Remarkably, the game’s only hit had nothing to do with the sole run scored in the Dodgers’ 1-0 victory.  In vintage Dodgers fashion, Lou Johnson drew a walk, reached second on a sacrifice bunt, stole third, and scored when the catcher’s throw sailed over the head of Cubs third-baseman Ron Santo.  Incredibly, the run was scored without either an official at-bat, or RBI.

If Koufax had achieved perfection, so had another man sitting sixty yards away. His name is Vin Scully, and for the past 67 years he has been not only the voice of the Dodgers, but the voice of baseball.  Mr. Scully, who began his tenure with the Brooklyn Dodgers in 1950, called his final game on October 2, 2016, at AT&T Park – the home of the San Francisco Giants.  Himself a member of the Baseball Hall of Fame, Mr. Scully is widely considered to be the greatest baseball announcer of all time. If you’ve never had an opportunity to hear him ply his trade, or (more likely) if you’re already missing him, treat yourself by listening to a recording of the final three outs of Koufax’s perfect game.

Fast forward to September 23, 2016. It is Vin Scully Appreciation Day, and the Dodgers have organized a special pre-game ceremony to honor the iconic sportscaster. At one point, Sandy Koufax, himself, took the pitcher’s mound, upon which a podium had been placed. Before a roaring crowd, one Hall of Famer said to another: “As many times as I’ve been on this field, I’ve never been this nervous.” It wasn’t fear of public speaking that gave rise to Mr. Koufax’s anxiety, so much as the fear of inadequacy experienced by a humble perfectionist. No worries.  He did just fine, as the cutaways to a clearly choked-up Vin Scully attest. In highlighting Mr. Scully’s humanity and decency, Koufax was once again, perfect.

Nine days later, Vin Scully called the final game of his career at, of all places, the home field of the Dodgers’ hated rivals, the San Francisco Giants. It turned out to be a love fest.  When introduced (while at his place in the visiting team’s broadcast booth, the crowd rose as one to give him a thunderous standing ovation. Between every inning thousands of fans turned toward the booth and raised signs painted in the Giant’s orange and black team colors, reading, “THANK YOU VIN.” At the seventh-inning stretch, the Giants’ broadcast team serenaded their “guest of honor” with a special rendition of “Take me Out to the Ball Game,” and the crowd, once again, roared its appreciation.  Though the Giants and Dodgers are bitter rivals, the classy Giants fans shone in their enthusiastic recognition of the contributions made by Vin Scully to the game they love. 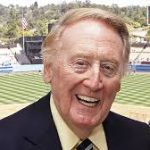 I can think of no one in the vast metropolis that is Los Angeles, who is as universally beloved as is Vin Scully, a man whose excellence as a broadcaster is matched by his excellence of character.  A model of civility, humility, kindness, caring and compassion, countless stories of personal encounters with Mr. Scully share a common thread: the legendary broadcaster always makes his admirers feel as if it is they, not he, who is/are special, and that it is he, not they who is grateful for every opportunity to meet, share a few friendly words, or do a small kindness.

When I witness art at its highest level I tear up.  It happens whenever I listen to the concluding notes of the first act of Puccini’s La Bohème.  It happens whenever I have a chance to stand before a favorite painting, such as Renoir’s Bal du moulin de la Galette.  And it happened as I listened to Vin Scully calling the final inning of his final game behind the microphone, knowing that he had succeeded in achieving (and modeling) the very best of which he is capable.

Most of us can only dream of approaching the levels of excellence achieved by Mssrs. Koufax and Scully. Yet, while none of us is likely to earn our living astride a pitcher’s mound in the presence of 50,000 onlookers, each of us can conduct ourselves as if others are watching, and hoping for the best we can deliver. And though the words we utter may not be heard by millions, we can, nevertheless, be aware of their power to alienate or engage, put down or lift up, hurt or heal, reject or embrace, confuse or enlighten, disparage or delight. Perhaps the greatest tribute we can pay to heroes such as Sandy Koufax and Vin Scully is to remain ever mindful of where we stand and what we say.